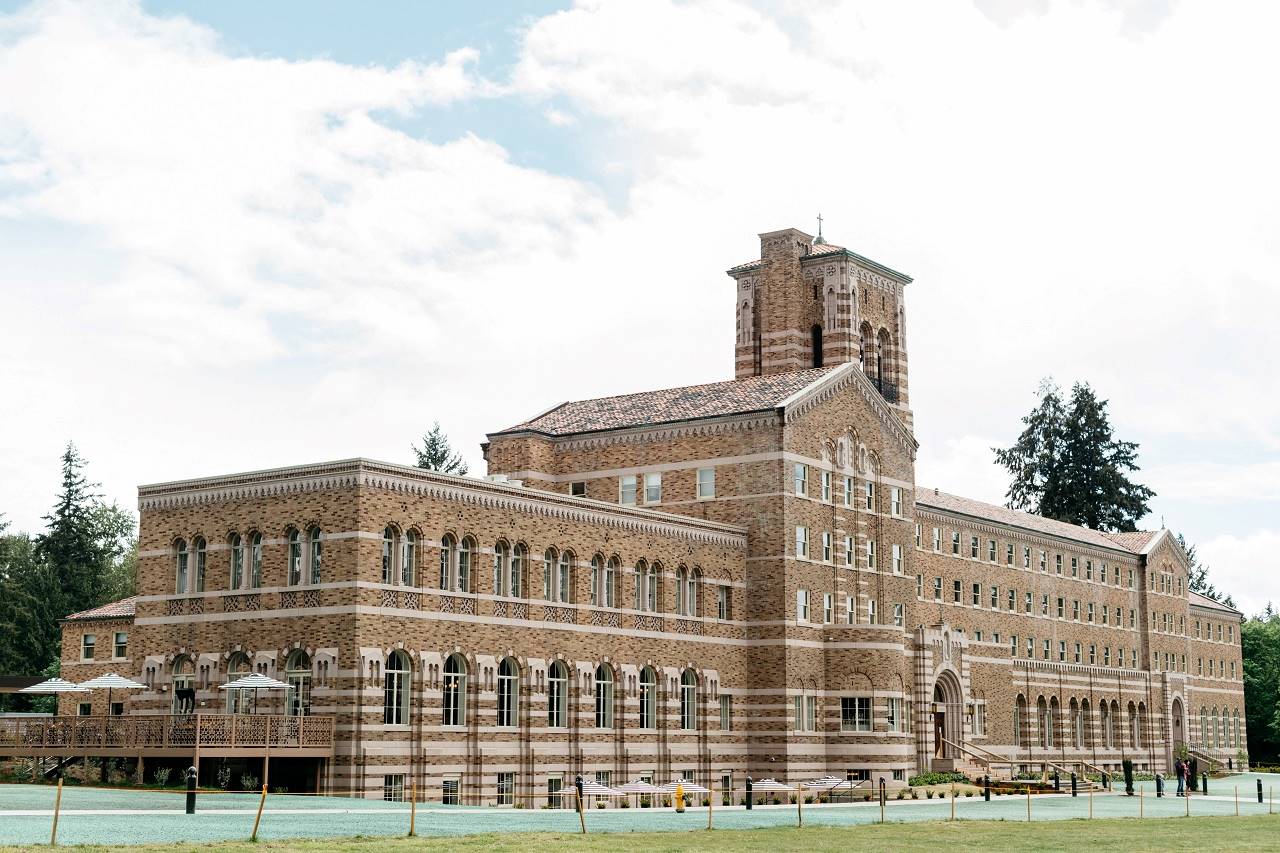 Overlooking the shores of Lake Washington, the seminary at St. Edward State Park has long been awaiting the right developer to revive the historic building. After 44 years sitting vacant, the former holy site has been redesigned as a sleek, $57-million-dollar hotel — the most expensive hotel in the state.

Originally, the building was a seminary that educated young priests for 44 years before being sold to the state. Since then, the property — which features Romanesque Revival architecture across its 90,000 square feet — has been viewed as both an opportunity and too much of a burden for most developers to handle.

Now, the former seminary has been dubbed The Lodge at St. Edward State Park and has reopened to guests, complete with comfortable rooms, a gourmet restaurant, luxury spa, two bars and 9,000 feet of event space. While much of the historic charm has been lovingly preserved, the rooms did require a major modification: each of the 84 guest rooms is actually composed of two of the former dorm rooms, allowing for a more modern and comfortable experience for guests.

Throughout the hotel, historic features have been preserved, such as the 90-year-old façade and an original clock in the former great hall. Pictures of the seminary’s original inhabitants adorn the walls, even while modern décor offers style and a sense of ease to guests.

As part of his 62-year lease with the city, owner and developer Kevin Daniels purchased an additional 10 acres of undeveloped land to add to the park, increasing the size of the park which already offered guests access to Lake Washington shoreline and miles of hiking and biking trails.

For those looking to book a weekend away or even an extended stay, the nightly rate starts around $300 — the same cost as a year of tuition for students at the old seminary.

Photo courtesy of The Lodge at St. Edward.

This article was originally posted on Seattle Met by Allison Williams and GettheWReport.com

Related Articles
Community Google Continues to Invest in Kirkland With the recent news that Seattle is the national leader in big tech office leases, it’s no wonder that Kirkland continues to be a prime spot for investment from Google. Google recently announced that it plans to invest more than $7 billion in offices and data centers around the U.S., including the continuing construction of […]
Community Windermere Foundation Has Raised over $825,000 This Year! Image source: Shutterstock   The first half of 2020 has brought uncertain times and unprecedented change, and across our network, our agents and offices have rallied with their communities through the challenges of the COVID-19 pandemic. We’ve seen offices come together in support of their neighbors by providing meals to frontline workers, donating to local food […]
Community Could New Seattle Tax Prompt Amazon to Consider Moving?   Once again, Seattle is attempting to leverage a tax on big businesses in the city, potentially ruffling the feathers of some of the city’s corporate behemoths. On Monday, July 6, the city council passed its latest big business tax proposal titled “JumpStart Seattle.” This might just be the last straw for Amazon, according to […]